Built in 1916 as a car storage garage, this brick structure was renovated and began showing films as the Berkeley Theater in 1928. The last major renovation, done in 1949 by the Alpine theatre chain, included the notable marquee that truly “lights up” the downtown every weekend. The present owners have kept the interior and exterior of that period. Known as the Star since 1977, this single screen, neighborhood movie house features one film that changes each weekend. One of the favorite attractions is popcorn with real butter, made in a 1949 Manley popcorn machine. Today’s concession room, with the feel of a 1940s parlor, served as the town’s telephone exchange from 1937 to 1967. (Listed NRHP 2009)

Read more about the history of the Star Theatre here. 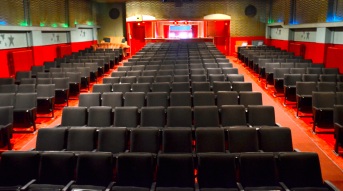